Our winding machine project for the customer Slavkaliy is on the right track.

At the moment the coutershaft of the service machine is in the finishing stage.

Finally it will have reached a length of 13.2 m and an average diameter of approx. 1 m. The total weight is about 70 tons.

Completion is on schedule. 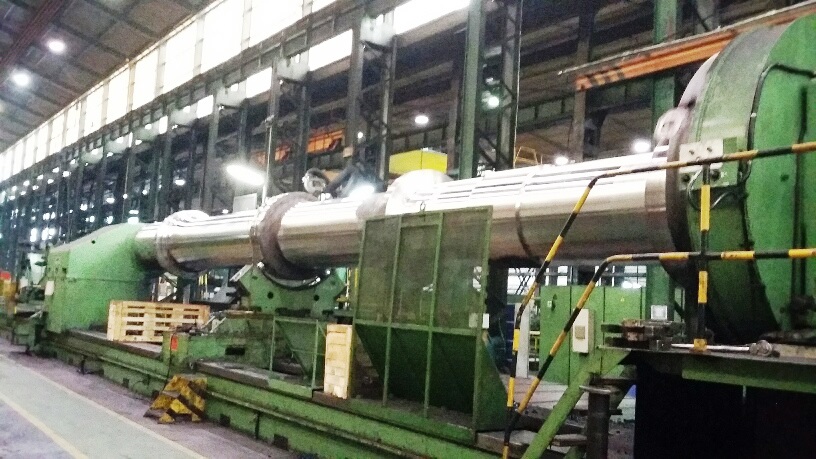 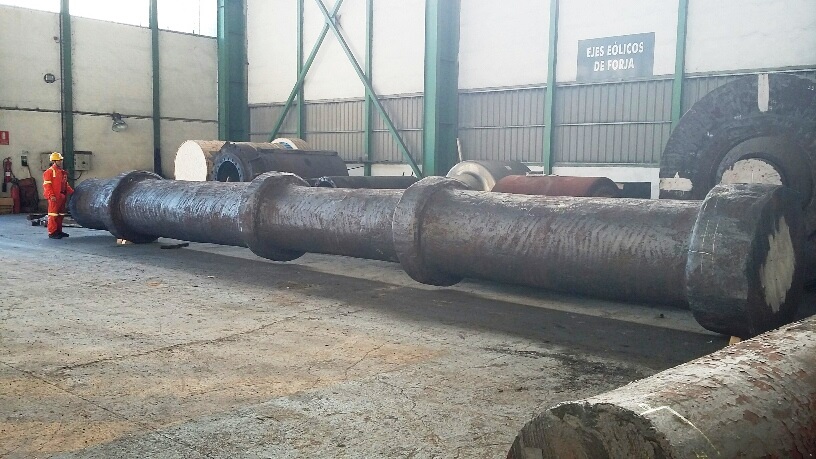 On 13 August 2019 we received the official order for the rehabilitation of shaft 1 in Mol, Belgium.

The shaft serves as access to an underground experimental laboratory for the final disposal of nuclear waste.

Even though the shaft is comparatively "small" with a depth of 230 m and a diameter of 2.65 m, this project is a future-oriented reference for THYSSEN SCHACHTBAU GMBH for waste disposal mining outside Germany.

We are starting now!

In addition to the cramped working conditions in the shaft, which we have to solve technically and organisationally, the following focal points are important for the success of the project:

The project is implemented with a completely new and young team. Therefore, teamwork is the key to success!

We are looking forward to the project. 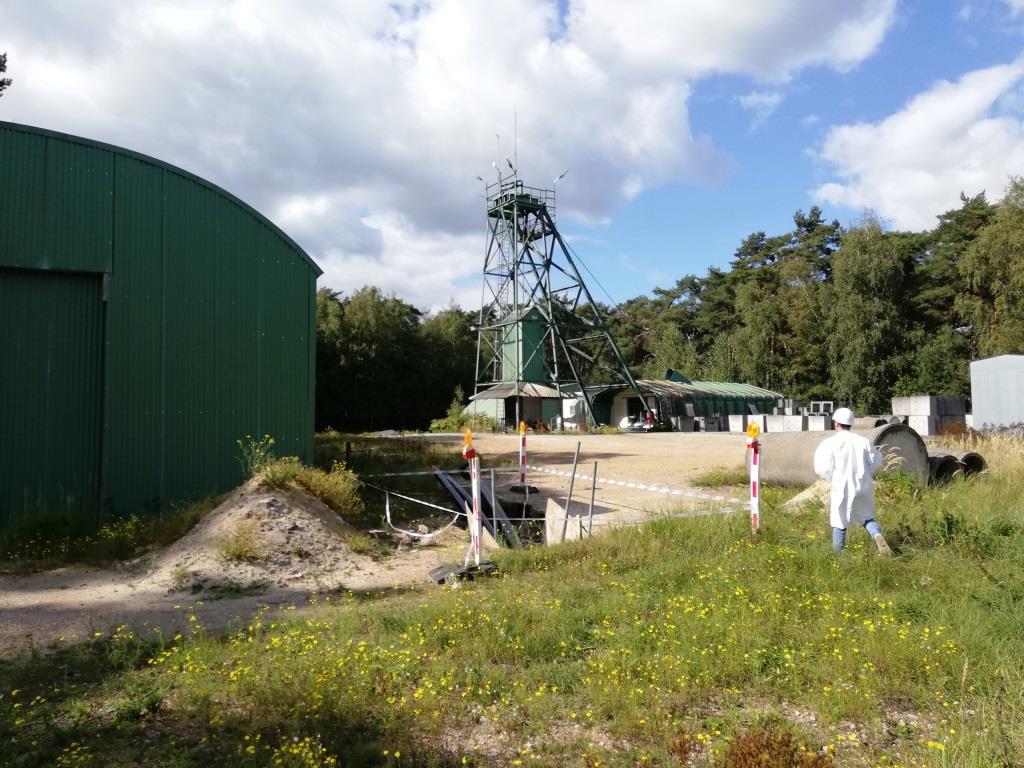 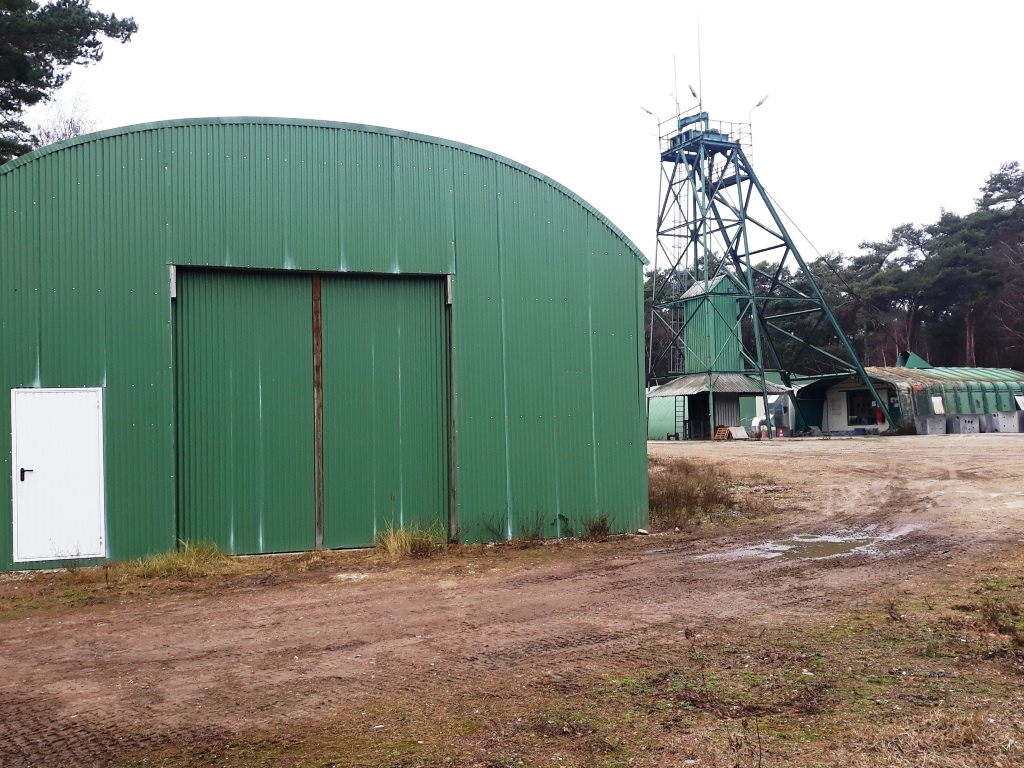 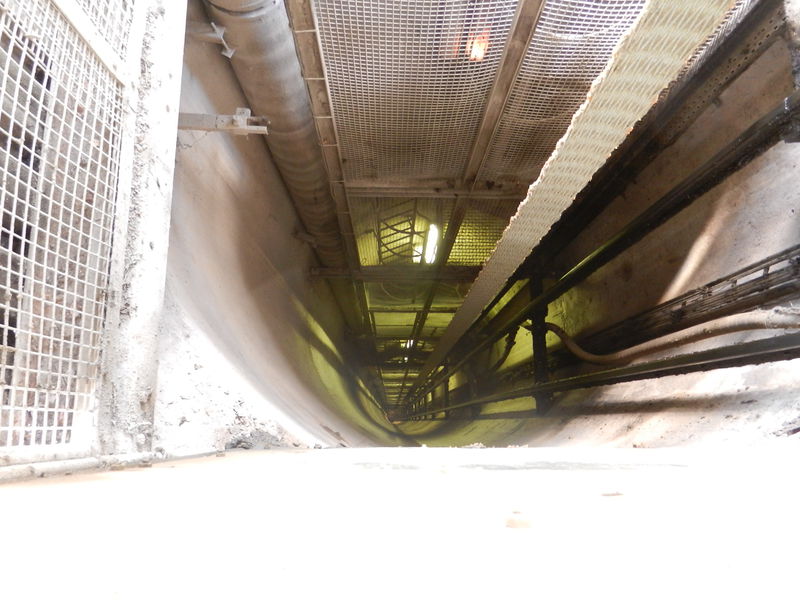 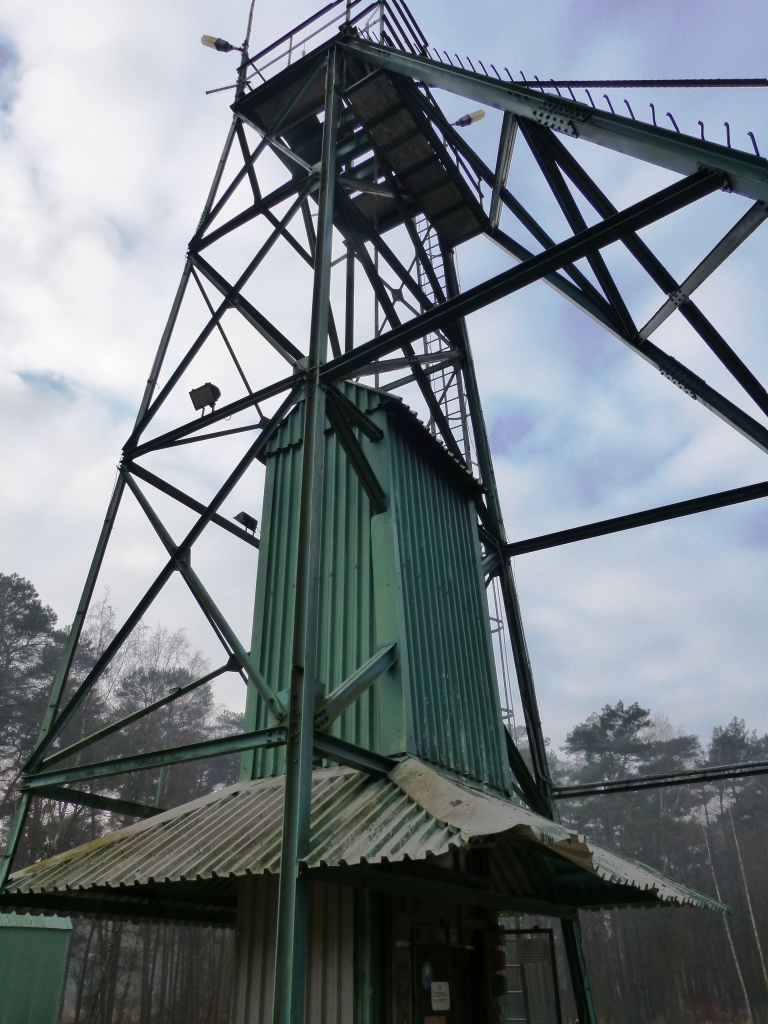 TS Technologie + Service has been awarded the contract for detail engineering, prefabrication and assembly of the test rig piping and a WHRU unit with pipe bridge for a turbine test rig.

These services were commissioned as part of the construction of a turbine test stand, which is intended primarily for demonstration purposes and customer training. To increase efficiency, a WHRU (Waste Heat Recovery Unit) will also be installed here. This will be connected to the GTP5 test rig and the pipe bridge.

The work of the joint venture AKV 1 for the excavations of the pits of the backfill preparation in lot 1 was completed on 29 March. The last anchor had to be drilled - a successful surprise for Managing Director Dr. Thomas Lautsch, who did not allow himself to be asked for long.

Thomas Dreyszas, Project Manager, and Clemens Mock, Plant Manager of ARGE AKV 1, reported on site on the services provided by the joint venture since the start of the excavation activities in May 2016. 15,000 m³ of excavated material, 10,000 m² of consolidation and 62 km of anchors were drilled and set, 12 km of which were first-securing anchors and 50 km of expansion anchors.

Dr. Thomas Lautsch and Dr. Jan Tegtmeier thanked AKV1 for their successful work and emphasized the fact that the work could even be completed before the original deadline. A small snack including the possibility of technical exchange rounded off the event underground.

The task now is to dismantle the construction site as far as possible and to concentrate on the installation of the inner shell in the pit washbasin - a rather atypical mining job.

The first coordination talks took place in October 2013. The services for the excavation of the pits of the backfill preparation as the last major mining project at the Konrad mine were put out to tender. This was followed by a large number of bidding interviews and inspections. The procedure ended with the award of the services in February 2016 to the joint ventures AKV 1 and Marti AKV 2 with an award value of € 76.5 million. ARGE Marti AKV 2 is still involved in the construction work due to its larger scope of services. 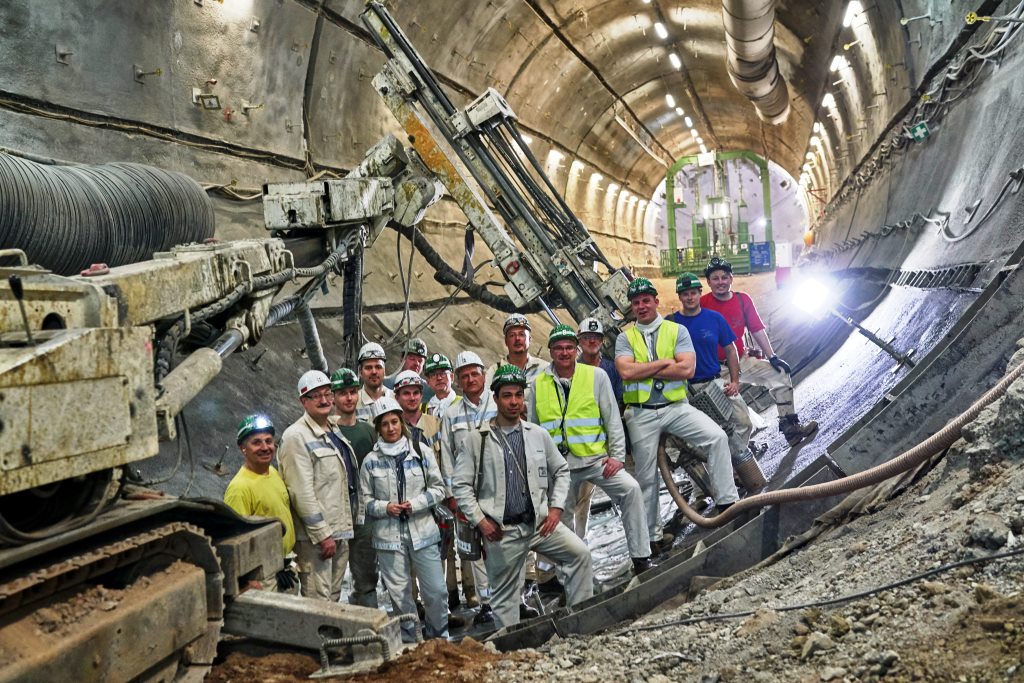 A winding machine for the Woodsmith Mine in England

In the past year, the media often talked about "the end of mining". But exactly what it meant was "only" the end of hard coal mining in North Rhine-Westphalia. In other federal states, such as the Saarland or Saxony, hard coal mining has been discontinued some time ago for economic and political reasons. However, mining continues to exist - also in North Rhine-Westphalia. For example, in the rock salt mine Borth of the company esco near Rheinberg, rock salt has been mined at a depth of approx. 700-900 m for decades. The rock salt is used in the chemical industry as table salt and in winter as road salt in road traffic. In eastern North Rhine-Westphalia, near Minden in the Weserbergland, Barbara Erzbergbau GmbH is mining a ferrous ore at a depth of approx. 120 m, which is used in road construction as well as in the concrete and cement industry. But even in the old coal mines in the Ruhr area, there is still much work to do after 2018. With the end of active coal mining these mines cannot be left to their own devices. For example, machinery and equipment must be taken out of a depth of at least 1,000 meters and pipelines and cables must be dismantled, old cavities and shafts secured and everything prepared for an increase in mine water. The execution of these "eternal tasks" in the mining industry includes the future work of the traditional Mülheim company THYSSEN SCHACHTBAU.

The origins of THYSSEN SCHACHTBAU go back to 1871 in a rolling mill for the production of steel strip in Mülheim-Styrum. The company is still located on Sandstrasse and Friedrich-Ebert-Straße in Mülheim an der Ruhr, Germany. THYSSEN SCHACHTBAU is now a mining specialist company that is active worldwide in mining, mainly in Europe and Russia. It does not itself win the raw materials, but rather supports mining companies. For example, in the north of Russia, a turnkey ore mine with surface buildings and two shafts is being built for one customer, reaching down to more than 2,000 meters. In the Urals, two shafts are being drilled for a new potash mine, in Kazakhstan underground sections are being excavated for a chrome ore mine, and in the vicinity of Salzgitter the company is participating in the conversion of the former iron ore mine Konrad into a repository for radioactive waste. In coal mining, THYSSEN SCHACHTBAU has been working for RAG and its predecessor companies for more than 50 years. Numerous shafts in the Ruhr area and countless kilometers of underground routes have been constructed by the company. Now, after the end of coal mining in Germany, the company brings its knowledge and skills in the necessary dismantling and closing of the mines and in the reconstruction of mine water.

Mine water in the Ruhr area

During the times of active coal mining, the water, which was fed to the coal mines, some of which were more than 1,000 m deep, was pumped from underground to the surface and then discharged into the rivers “Ruhr”, “Emscher”, “Lippe” and the “Rhine”. The water was originally rainwater, which has been through many layers of rock over a long period to these depths. In order to prevent the mines from "drowning", so much water was always pumped that even the deepest points of a mine always remained dry. With the end of mining, it is actually no longer necessary to pump the water. The mines have already been or will be cleared in the next few years, the shafts will be closed and no one will stay underground anymore.

But without pumps, the mine water could rise so much after many decades that it mixes with the groundwater. Since the mine water can dissolve salts and minerals and other substances on its long way through the underground from the rock, these substances would also reach the groundwater. So that the effort for the purification of the groundwater, from which a part of the drinking water in North Rhine-Westphalia is won, is not too high, one plans also in the future to pump so much pit water, that it does not go further than up to approx. 600 m under the surface rises. Thus it has sufficient distance to the groundwater and cannot mix with this. Damage to the surface caused by uplifting of the substrate can also be avoided.

Of course, the pumps, which were previously underground at a depth of approx. 1,000 m, are no longer suitable for this purpose. They have already been or will be dismantled in the near future and the water slowly rises from about 1,000 m up to about 600 m. This will take many years. Until then, so-called well water systems will be installed in 13 former shafts. In this case, the shaft is not easily closed when leaving a mine as normally with building material. Rather, three pipes with a diameter of approx. 1.4 m from underground to above-ground are installed at the same time. Then, as in a well, submersible pumps are placed in these pipes and drained to about 600 m. From this stage, the pumps then pump the mine water to the surface. Of the 13 shafts that are equipped in this way, only six shafts, which are distributed over the Ruhr area, are supposed to pump water. Another seven shafts are available as reserve locations.

THYSSEN SCHACHTBAU supports the RAG with its many years of experience in these alterations. Thus, two shafts of the former mine Auguste Victoria in Marl have already been closed, two more are currently being filled. Further shafts still need to be rebuilt in the next few years. The conversion work should be completed by the year 2022. So long there will be work for miners in the Ruhr area. But also for the time after 2022 THYSSEN SCHACHTBAU is already well prepared by its many projects at home and abroad and so you will hear for a long time the "Glückauf" of the German miners.

We use cookies on our website. Some of them are essential for the operation of the site, while others help us to improve this site and the user experience (tracking cookies). You can decide for yourself whether you want to allow cookies or not. Please note that if you reject them, you may not be able to use all the functionalities of the site.