High-precision drilling of 650 m at the Artemyevsky mine.

In June 2020, ТОО "SCHACHTBAU KASACHSTAN", received an order from TOO "DIM Stroy" to drill two 650 m high-precision boreholes at the Artemyevsky mine in the Republic of Kazakhstan for the client Kazminerals. The project was realized in a cooperation between ТОО "SCHACHTBAU KASACHSTAN" and the Russian subsidiary of Thyssen Schachtbau GmbH - OOO "Thyssen Mining Construction East", Moscow.

Due to the geological situation on site it was necessary to install a 630 mm standpipe, to secure the upper loose rock strata. After setting up the drilling rig with a mud cleaning chain, drilling with a diameter of 490 mm and a depth of 50 m was initially planned on both boreholes. This was to be cased with an anchor pipe tour outer diameter of 426 mm. Subsequently, drilling was to be carried out with a 311 mm caliber bit to the final depth of 650 m.

A very maneuverable RB 50 universal drilling rig on a truck chassis with mast extension was used to carry out the work. The advantages of this drilling rig are its very compact design, combined with a high hook load of 500 kN and a torque from the power head of 31,580 Nm. The attached mast extension allows the installation of casing up to a pipe length of 12 m. A scaffold-mounted, 12 m long platform with integrated boom trolley was used as the working and boom platform. Due to the modular design of the working platform, a safe and effective working area was available for the drilling personnel for each work step. To realize the required drilling mud volume and drilling mud pressure needed when drilling with a downhole motor, an HPS high pressure pump was used. This, together with the hydromechanical drive and all components required for operation, is permanently installed in a 20-foot overseas container. By means of a cable-connected remote control, it was possible to operate the pump from the control station of the drilling rigs. For trouble-free effective operation of the Quituplex pump, Mission centrifugal pumps were installed upstream as charge pumps. The cleaning and storage of the required drilling mud was realized by Derrick shaker screens, Desanders and three agitator tanks with a capacity of 26 m³ each. Continuous monitoring and conditioning of the drilling mud were carried out by personnel trained for this purpose.

The complete construction site equipment was assembled in Russia. In spite of all logistic problems, especially due to the beginning restrictions because of the world-wide pandemic, it was brought to the construction site in the East Kazakhstan region by the shipping and logistics department of THYSSEN SCHACHTBAU in cooperation with several international forwarding companies.

Several downhole motors with an outside diameter of 240 mm were available throughout the drilling phase. Through the use of experienced and trained personnel, trouble-free operation was ensured by the correct application. The experience of the drilling personnel, in cooperation with the drilling engineers, had led to quick and correct decision making in many situations.

Shortly before reaching the target depth, the team was put to the test one more time. In one of the numerous safety meetings between the various contractors and the client, it became clear to us relatively quickly that we would not be able to complete the work as planned after reaching the target horizon at 650 m TVD and inserting the 245 mm tubulars in the mountain massif without a section break. Due to various events, it became apparent that a horizontal roadway was already in place at a depth of -630 m. Accordingly, a new concept for the now necessary breakthrough through the roadway ridges had to be worked out at short notice. Thanks to short decision-making processes, this situation was mastered with the necessary calm and concentration. In both boreholes, the breakthrough in the roof of the roadway was reported at a depth of 627 m TVD. After successfully drilling through the ridges, final measurements were taken at both boreholes. These measurements have established an accuracy of the boreholes from the vertical axis of 21 cm for the TDS-2 and an accuracy of 18 cm for the TDS-1 borehole. Thus, the specification of a maximum deviation of 1 m from the vertical axis to the target depth was far exceeded. During the drilling work, SCHACHTBAU Kazakhstan was additionally contracted to install the technical pipe tour with an outside diameter of 178 mm. This supplement was also successfully realized.

Despite adverse climatic conditions - on some days the thermometer dropped to -43° C - both wells were drilled, cased and cemented in a construction period of only six months. Work was successfully completed in March 2021 with an accuracy of 21 cm for the TDS-2 well and an accuracy of 18 cm for the TDS-1 well. During the drilling operations, peak daily performance of more than 50 m in the rock was achieved several times. In total, the Prakla RB 50 drilling rig used was moved several times from one borehole to the other. Thanks to the consistent implementation of the certified safety standard applicable to SCHACHTBAU Kazakhstan, there were no accidents on the construction site during the entire construction period. 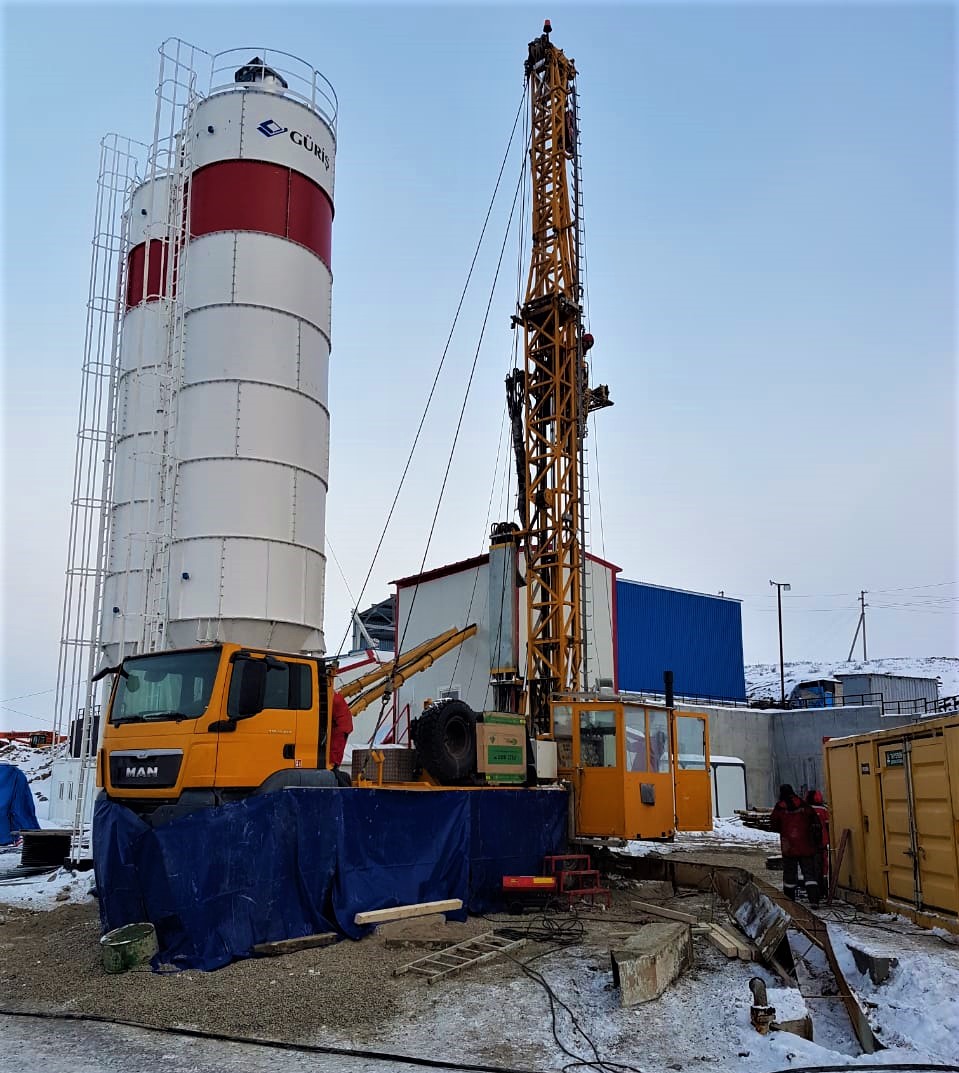 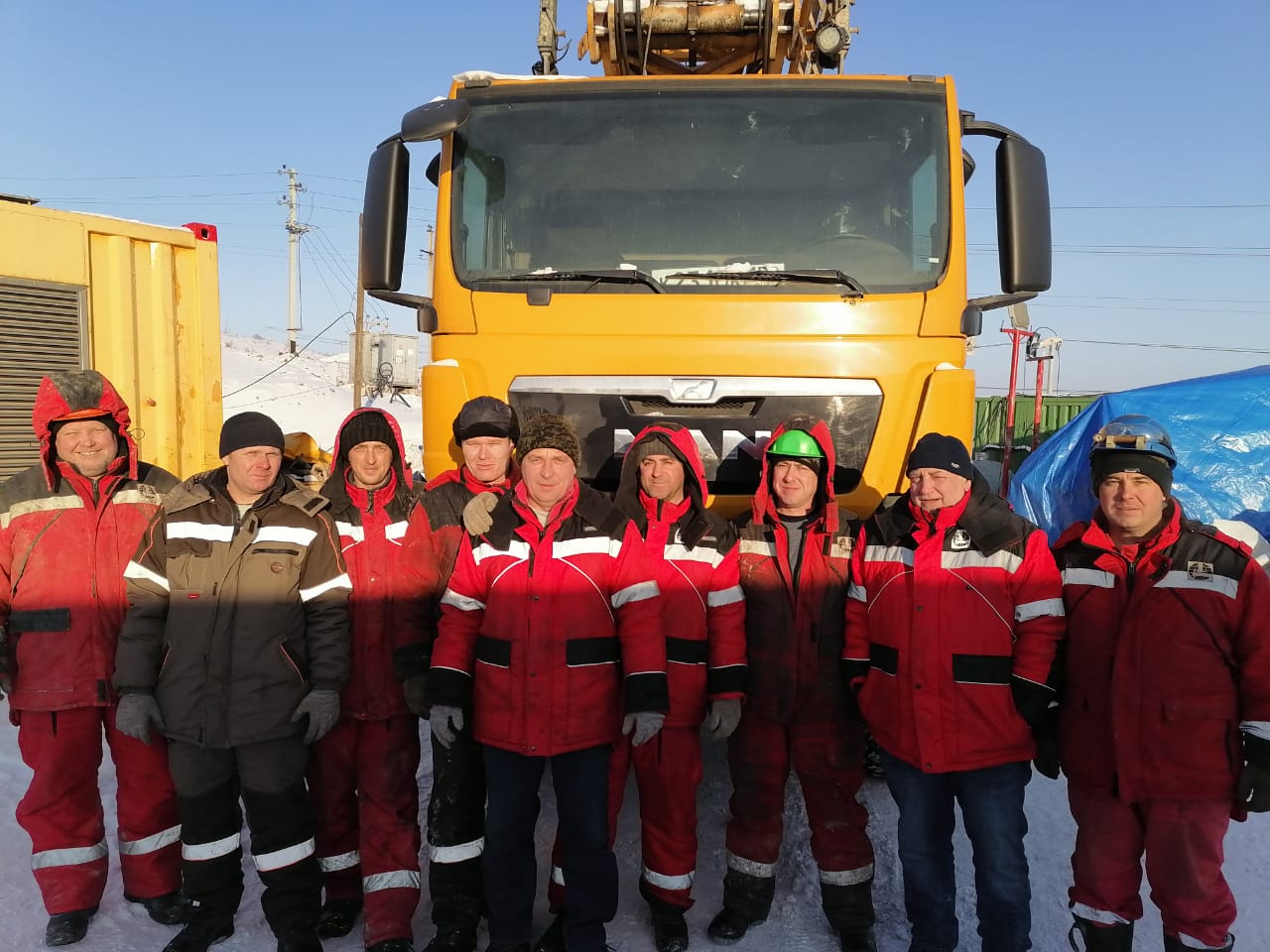